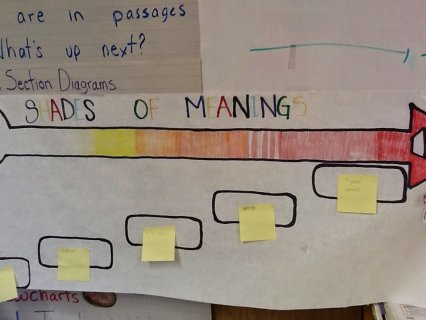 SemanticsIs primarily that branch of the academic discipline of linguistics concerned with ‘the study of linguistic meaning, of words and sentences’ (Katie Wales, ‘A Dictionary of Stylistics’). It is, however, sometimes used loosely to dismiss an argument. A speaker who either doesn’t understand a point that is being made, or who feels someone else is winning the argument, might say ‘Well, that’s just semantics.’ In that kind of context the speaker intends it to mean something like ‘You’re just playing with words, not addressing the substance of the debate.’

The first of your examples sounds as if the writer is using ‘semantics’ to make a fairly banal statement sound more impressive. The second example uses the everyday word ‘meanings’, which is actually likely to be more effective. At least it might be if it had not used the exact words ‘much meanings’. Normal English would be either ‘much meaning’ or, perhaps, ‘many meanings’. Better still might be ‘Trending topics in Twitter don’t mean much.’