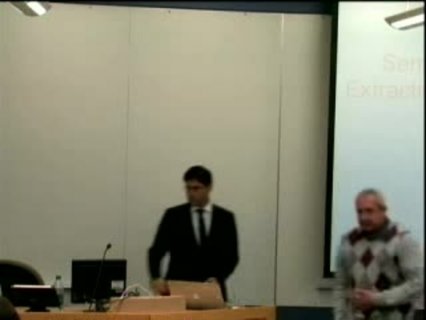 The meaning of "semantics"

Dave McComb's book Semantics in Business Systems recommended John Saeed's Semantics as an "excellent introductory book on semantics in everyday life", so I found a cheap used copy and have been working my way through it. I'm sure that it's been used for both graduate and undergraduate courses, and it's not too difficult to follow so far. I especially like this part, which Saeed said he adapted from the work of Charles Morris:

syntax: the formal relation of signs to each other;

semantics: the relations of signs to the objects to which the signs are applicable;

pragmatics: the relation of signs to interpreters.

He goes on to say that "the whole science of language, consisting of the three parts mentioned, is called semiotic", but I was more interested in the way he put semantics in the larger context.

Printed and dictionary.com definitions of "semantics" typically come in pairs, with the first usually saying "the study of meaning" and the second more in line with Saeed's definition. The latter is sometimes identified as being specific to the fields of linguistics or semiotics.

I think that the linguistics/semiotics definition serves the semantic web better, because describing semantics as the relations of signs to the things they signify (and moving some of the "meaning" parts that take place in peoples' heads to the "pragmatics" category) helps us to focus on what the semantic web is the best at: providing an infrastructure to identify which signs (IDs in the form of URIs) refer to which objects (resources) so that people can use this infrastructure to create applications that work across the web.