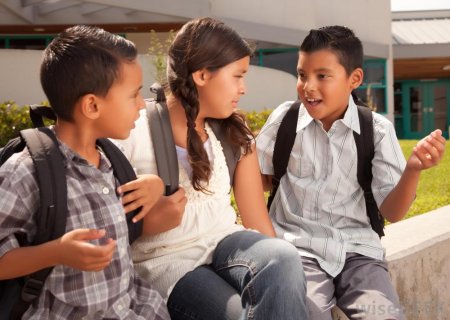 This is sometimes apparent from their unusual responses when they are told to do something, and sometimes it is revealed by the questions they ask, and the things they say about words. For example, 12 year old Nerida, when confronted with the task of defining the word "acquire" was unable to detect from the context that she was being asked what "acquire", rather than "a choir" meant.

"Nerida, what does acquire mean?" Her fleeting glance reflected a significant improvement in the eye-contact stakes. "How can I know what a choir means?" she rasped. "A choir is a whole bunch of singers, right? Their songs don't mean anything...because you can't understand them right, because they all sing at once." She scowled bleakly for emphasis, adolescence looming. "Not that sort of 'a choir' - I mean this sort of 'acquire'." I wrote it down.

"Oh!" she said, "Acquire. Acquire means you've got something you didn't have before. When I pick things up at the bank, dad says, "Where did you acquire all those forms? But I don't tell him because he already knows they're from the bank. He says 'acquire' right because he doesn't want to say 'steal' and he can't say shoplifting because its banklifting. Ha ha".

She laughed dryly and warmed to the topic. "When I speak 'french' he says, 'And how did you acquire that language?''"

Characteristically, Nerida, who fits neither the Asperger's nor the semantic pragmatic language disorder criteria precisely, wanted to grapple minutely and pedantically with all the ramifications of the word "acquire". Her unique perspective on word meanings gave pause for thought.

People with semantic processing difficulties have particular trouble with abstract words like 'curious' or 'vague', words that relate to feelings and emotions such as 'embarrassed' and 'anxious', and words that refer to status (for instance 'expert' or 'authority') or degree (for example, 'essential' or 'approximate').

They have difficulty with idioms, sayings and slang expressions, often taking them literally or interpreting them oddly. For example, when asked if he enjoyed spending time with his friends, a 14 year old with semantic processing problems replied, "I don't see how you can spend time, and I certainly don't see how you could enjoy it because spending time is not something you can do. You can only actually spend money". There are more examples of over-literal interpretation below.

Another difficulty children with semantic problems experience is that they may not be able to identify the key point or topic in a sentence, and because of this may suddenly change the subject, very obscurely, apparently thinking they are on the same subject. Here is another real example from a girl aged eleven. Question: "Could you get the book off the shelf and give it to me?" Reply: "The Gulf Stream warms the coast-line"

Bjarne Stroustrup - The Essence of C++: With Examples in ...

RSA Animate - Language as a Window into Human Nature

OWL: An Ontology Language for the Semantic Web

RT @cheuya: Semantics PURPOSELY constructed to overshadow deeper threads of a framework designed to kill us. Do you understand? Tue, 23 June 2015 07:06 AM